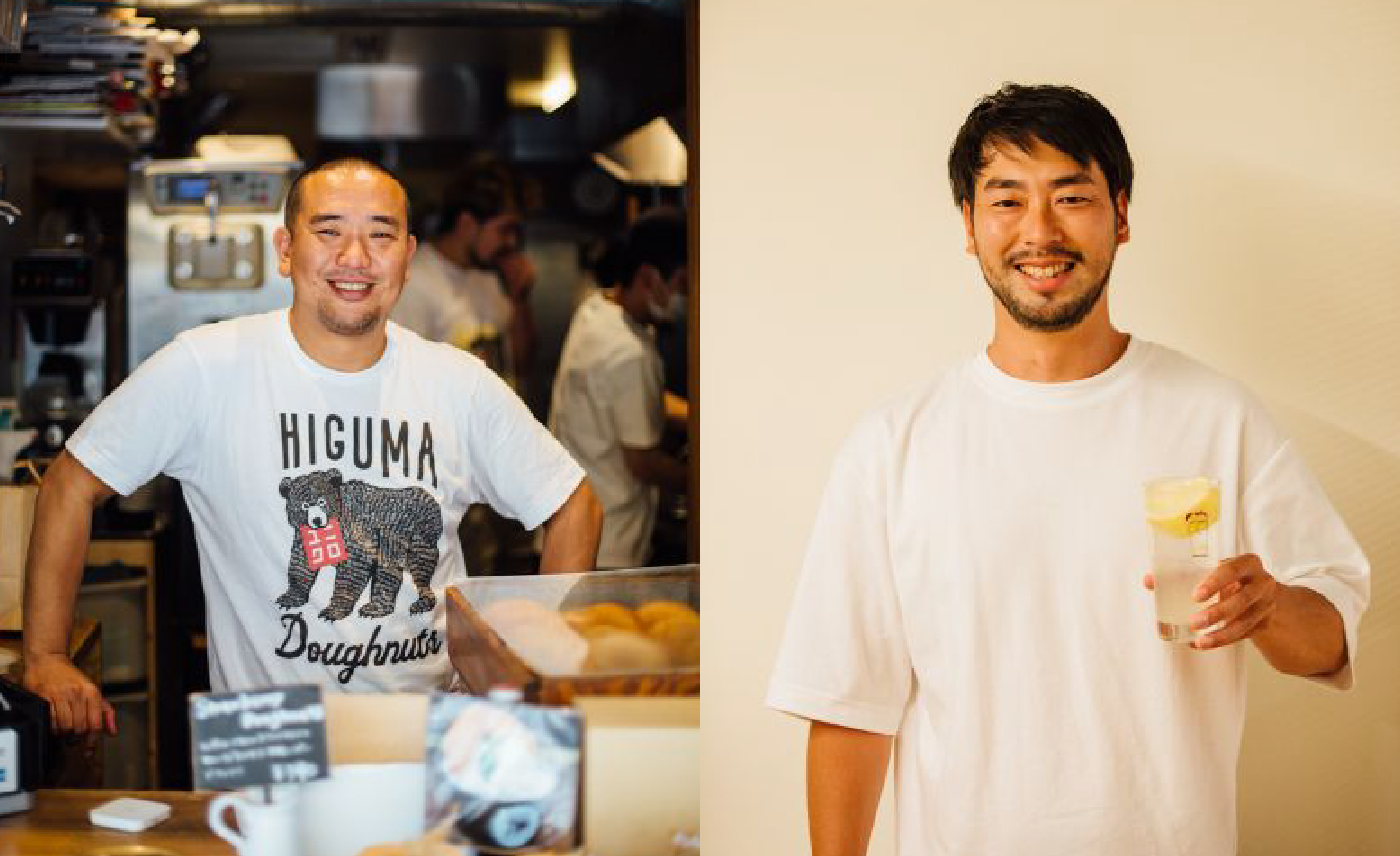 HIGUMA Doughnuts from Gakugei University
and SOUR from Kyoto opening a joint store in the park!

“I wanted to open a shop near a park, even before opening the current shops,” says Jun Kasugai of HIGUMA Doughnuts with a big smile on his face. “I have children, so I know how peaceful it is to spend time with the family in a nearby park. It would be great if we could create another peaceful space. If IKE・SUNPARK becomes that kind of a park, it will make family time together a lot happier.

Mr. Kasugai is from Hokkaido. His desire to use local ingredients to revitalize his hometown and his experience of studying abroad in Canada when he had encountered a delicious doughnut shop led him to come up with the concept of creating a community through doughnuts made of Hokkaido’s local ingredients. Making doughnuts, which he started as a complete amateur, was a constant struggle at first. It took him about a year to make doughnuts that he was satisfied with. After selling the doughnuts at several events, he gained more fans and opened his first shop in 2016 near Gakugei University Station.

“It’s been four years since I opened my shop in Gakugei University. There is a small park in front of my current shop. This everyday greeting of ‘Hello’ is essential for both passers-by and customers. We want to take care of the things we value in our business here in Ikebukuro as well. I think this will lead to an expansion of the community in the new place too,” says Kasugai.
Of course the park is a playground for kids during the day, but IKE・SUNPARK is nighttime friendly for adults, too. ‘When I heard about the idea of opening a stall in the park, I wanted to create a culture where people could drink outside. That’s the first thing I thought of,” said Mr. Shuji Tatebe of SOUR, a fruit sour shop. He continued, “It’s also important to me that I want to get involved in creating a place that has never existed in Japan before.”
Mr. Tatebe met SOUR while on a business trip from his previous job. While visiting the shop every night, he and the owner hit it off, and three years later they were working together. SOUR, located in Kawaramachi, Kyoto, always offers more than 15 different types of fresh fruit sours, depending on the season, with its signature lemon sour being the main menu item.
“The fact that we’re also having a farmers market at the park was a key factor in our decision to open the shop. Fresh seasonal fruit and sours go perfectly together,” says Mr. Tatebe. Through the sour, he also wants to introduce young, undiscovered farmers to the public. We can’t take our eyes off the Farmers Market’s seasonal fruit and sour collaboration all year long. 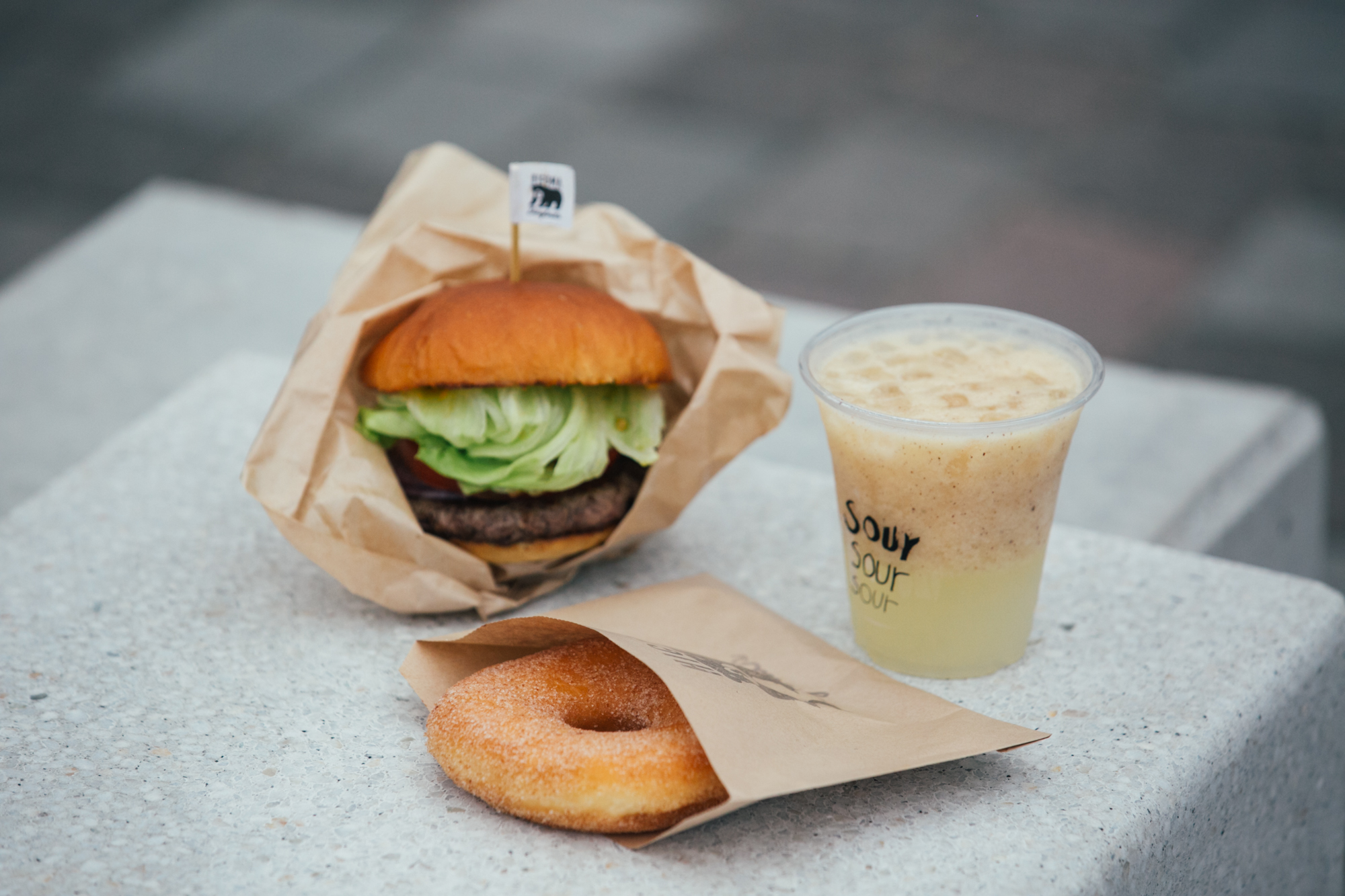 HIGUMA Doughnuts is popular for its homemade doughnuts using ingredients from the owner’s homeland of Hokkaido, but in addition to doughnuts, the shop is also preparing weekend-only hamburgers, Genghis Khan, and other menu items that will allow you to enjoy a filling meal.

SOUR, a sour shop specializing in fresh fruit sours, uses the most delicious fruits of the season supplied from contract farmers across the country and prepares them to order. The sour made with the fruits is as satisfying as eating the fruits themselves.

A doughnut shop and a sour shop, an unexpected combination of the two shops, are united by the theme of “a park that can be enjoyed by both adults and children,” creating a new chemical reaction. 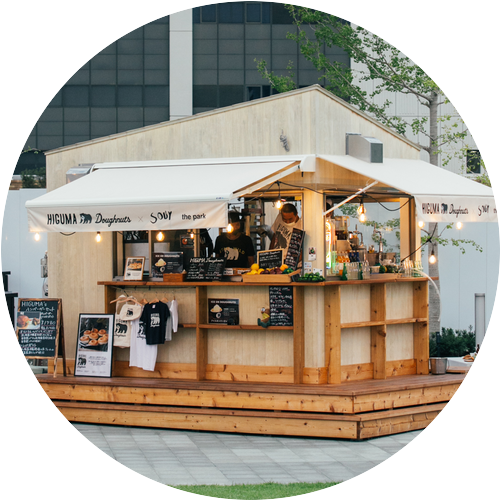